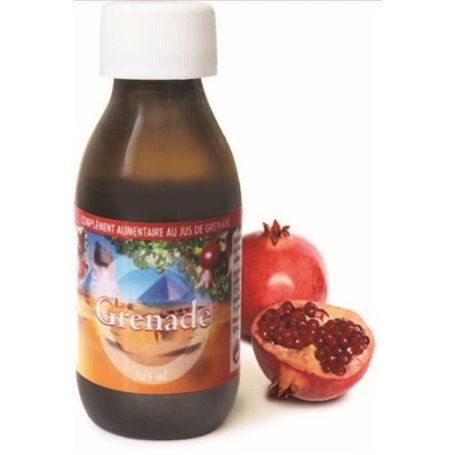 Originally from Iran , Grenada through time ... It is probably the only fruit that has resulted in so many symbols for millennia : Fertility , Power, Health , Immortality ... Symbol of life in ancient Greece it was considered the fruit of the gods among the Egyptians (they buried their dead with grenades ) . The Bible refers to the Song of Songs and according to some researchers , the " pomegranate " is the forbidden fruit of Adam and Eve. While the Greeks used it as an anti- inflammatory remedy, Georgians used it mainly to calm hemorrhage Hippocrates recommended for skin diseases or burns .

At the heart of scientific research.

Currently there are more than 250 scientific studies on the positive effects of Grenada, due to its high antioxidant power . Cardiovascular disease, osteoarthritis , hypertension or neurological disorders: benefits of Granada on the prevention of these risk factors have been demonstrated by clinical studies :
- According to the famous and serious American Journal Of Clinical Nutrition, antioxidant protection in humans is already improving by 9% after a course of a week of daily consumption of 250 ml of pomegranate juice ( Aviram et Al , 2000) .
- Israeli researchers conducted a clinical trial of 10 subjects with atherosclerosis and stenosis. They took 250 ml of pomegranate juice for 1 year. The results indicate that regular consumption has improved blood flow and contributed to lower blood pressure .
- According to the Medical Vulgaris , regular consumption of Granada could significantly reduce oxidative stress responsible for aging arteries of about 30 to 50%.

On the other hand , anti -inflammatory , digestive or sexual virtues have been highlighted in numerous studies and research.

Antioxidant activity 3-4 times higher than green tea or red wine Numerous studies rank Grenada topped the list of the most antioxidant-rich fruit to blueberries, strawberries, raspberries or blackcurrants . In addition, its antioxidant activity is much higher than red wine, green tea or grape juice . The main antioxidants in Grenada are flavonoids , tannins and ellagic acid. Grenada is also one of the most famous sources of ellagic acid in the world , a powerful antioxidant polyphenol , described in more than 500 studies . Polyphenols present in large quantities capture the free radicals responsible for aging-related pathologies: oyxdation . Pomegranate juice contains a higher amount of antioxidants seeds solely because of the press.

Vitamins, minerals, trace elements, fiber ... more than a fruit, a superfood ! Natural powerful anti-aging , cardiovascular protective inhibitor of cholesterol , anti -inflammatory ... So many properties that make Grenada the ultimate anti-aging product ! In addition to its high antioxidant content which gives it a protective effect against free radicals , Grenada is full of essential nutrients.

- Vitamin C (40 % RDA ) high content compared to other fruits. Vitamin C contributes to healthy cartilage, bones. It also protects against infections and promotes the absorption of iron from vegetables.
It is also the main source of dietary antioxidants .
- Vitamin B6 : also called pyridoxine , vitamin B6 participates in the metabolism of proteins and in the manufacture transmitters . In general , vitamin B6 helps to strengthen the immune system.
- Vitamin B5: more scientifically known as pantothenic acid is a coenzyme that allows the body to use energy from ingested food . It is also within the manufacturing process of neurotransmitters and hemoglobin .

Potassium : This is the mineral that dominates the Granada with an intake of 250 mg ! Potassium is an essential nutrient for controlling nerve impulses. It performs several vital functions such as the transmission of nerve impulses , the proper functioning of the kidneys , muscle contraction. It participates in maintaining acid- base balance of the body.

- Vitamin D regulates calcium levels in the body.
- Vitamin E: very rare in common fruits .
- Vitamin A: needed to convert food into energy .
- Fibres : necessary for digestion.
- Phosphorus: it plays an important role in energy production and deemed useful for the brain.
- Calcium: essential for bone formation.
- Magnesium: essential for nervous and emotional balance.
- Sodium: necessary for the functioning of muscles and nerves.
- Iron: essential for the production of ATP , the primary source of body energy .
- Zinc strengthens the immune system .