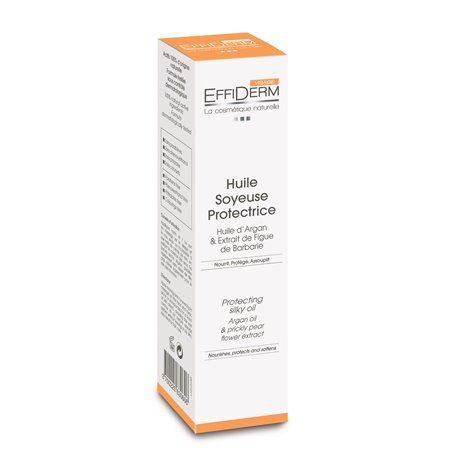 Sweet Almond Oil: Composed mainly of mono-saturated fatty acids, sweet almond oil is used as an emollient in skin irritations such as erythema, itching, and more generally for all skin problems. drought episode, due to its nourishing, softening, moisturizing and anti-inflammatory properties.

Core oil: Very rich in vitamins, it soothes the skin, soothes redness, and gives suppleness to the tissues. Emollient and nourishing, it revitalizes tired skin.

Borage oil: Borage oil is extremely rich in essential fatty acids spolyunsaturated, especially in linoleic acid (38%). Its particularity lies in its percentage of Linolenic Gamma Acid (20% on average) whose manufacture by the body is not always ensured. The presence of these EFAs allows hydration of the epidermis: used regularly, it softens and firms the skin, by its regenerating and restructuring action.

Olive Oil: Made up of almost 80% of essential fatty acids, essential for the growth and functioning of cutaneous cells, olive oil is used to nourish, protect and soften the skin, especially in areas dry. It is also rich in vitamins and polyphenols, which facilitate cellular regeneration.

Argan oil: Rich in essential fatty acids, Argan oil acts on the elasticity of the skin and nourishes it. It fights against drying out and aging by regenerating the hydrolipidic film.
Its antioxidant vitamin E content helps fight against external aggressions. it is known for its nourishing, regenerating and restructuring properties.

Oily macerate of Ginkgo: The Ginkgo, "tree with 40 crowns" appeared on earth about 250 million years ago, can live more than 1,200 years. Its resistance to climatic upheavals and radiation during historical events such as the bombing of Hiroshima make it a very famous tree. Its contents enflavonoïdes and triterpenes confer to him circulatory properties, oxygenating, anti-inflammatory (soothe the irritated ones) and anti radicals very popular in cosmetics. Ginkgo is also used in preventive "anti-aging" treatments because it stimulates the synthesis of collagen, fibronectin and the proliferation of fibroblasts.

Prickly Pear Flower Extract: The plant has many healing and anti-aging properties, due to its richness in carotenoids, tocopherols, phytosterols and unsaponifiables, participating in the regeneration and protection of the epidermis from barbarism by its high contents. Vitamin E and flavonoids protects the skin from pollution. Thanks to its anti-radical action, revitalizes and soothes sensitive areas.

Directions for use: Apply morning and / or evening massage on the face and neck, alone or incorporated into a walnut care cream, avoiding the eye area. Its dry, light texture penetrates quickly without leaving a greasy film. Ideal also for hair care.