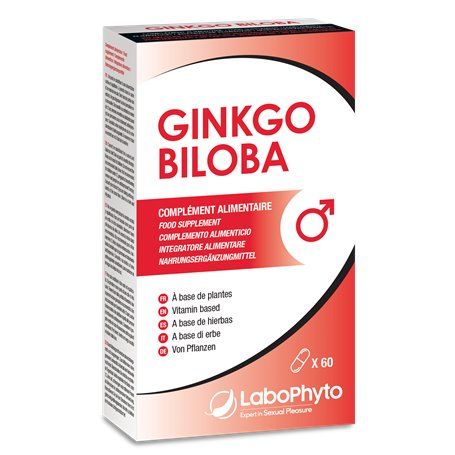 Ginkgo Biloba is one of the most famous dietary supplements.
The plant extract of this millennial tree improves blood circulation, including in erogenous zones such as the penis.
But it also helps cognitive functions by promoting memory and mental balance.
Made in France, Labophyto's Ginkgo Biloba + is compliant with European standards for authorized nutrition and health claims.

The properties of Ginkgo Biloba are as follows:

Ginkgo Biloba, also known as "the tree with forty crowns" or "the tree with a thousand crowns" already inhabited the land about 300 million years ago. It is part of the oldest family of trees that we know. Almost extinct during the Ice Age, it was reimplanted by subjects found in ancient Chinese temples. It is a very resistant tree that can live up to a thousand years. Ginkgo Biloba is now grown to meet the needs of its medicinal use.

2 capsules a day with a large glass of water.
Consult your doctor if you are taking anticoagulants at the same time.

Vegetable capsules
Capacity: 60 capsules
Net weight: 32.7 g
Ingredients: ginkgo biloba (leaf)
Dosage for 2 capsules: ginkgo biloba (100 mg)
Made in France: product in accordance with European texts relating to authorized nutrition and health claims
Feature: dietary supplement
Brand: Labophyto
Dietary supplements can not be substituted for a varied and balanced diet. To be consumed as part of a healthy lifestyle. Do not exceed the recommended daily dose. Do not leave within the reach of children. Should not be used by pregnant or breastfeeding women, and by people undergoing medical treatment. For your health, eat at least five fruits and vegetables a day, practice a regular physical activity, avoid eating too much fat, too sweet, too salty, avoid nibbling between meals.